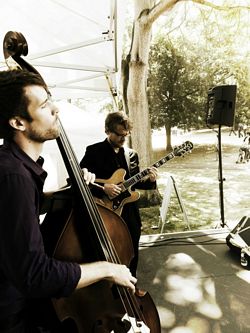 This summer saw Nathan Hassall Music work closely with Grosvenor Britain & Ireland and Ethix Productions in delivering the 2nd “Summer in the Square” Festival, held on Mayfair’s Grosvenor Square from 11th – 28th July 13. The festival was completely free to the public and included informal live music concerts, theatre performances, workshops and lots of activities for children.

Nathan Hassall Music was brought in by Grosvenor as the main supplier of musical acts for the festival after they hired a number of our Jazz Bands & Musicians for performances at their property openings, press nights and private viewings earlier in the year.

For “Summer in the Square” our music agency provided musicians and bands for a whopping 17 performances during the two and a half week run of the festival, and we were tasked with producing a programme that reflected the diversity of culture within the capital. We therefore supplied the festival with acts that covered a whole range of musical tastes from Classical Music through to Jazz, and from Brazilian Bossa Novas and Sambas through to Classic Rock and Pop.

As well as having our acts perform at the festival’s free concerts, our fantastic jazz & swing party band The Swingin’ Times was booked especially to perform at Grosvenor’s exclusive sponsor events, and both the opening and closing parties. For these events the aim was to create much more of a party atmosphere and so The Swingin’ Times performed a classic mix of popular Rat Pack, Trad-Jazz, Swing, Bossa Nova and even the odd Pop Classic! They certainly gathered a crowd at each of their performances and got many guests and passersby dancing!

One of the highlights of these diverse concerts and performances were three “Showcases” where following Grosvenor’s selection of 6 bands (that Nathan Hassall initially shortlisted), these great upcoming Folk or Pop Bands were given an opportunity to perform a 45 min set of their own original material to the sizeable evening audiences at the festival. These “Showcases” were a great success, receiving fantastic comments from the public, musicians and festival staff alike and brought a new twist to festival this year.

If you were managed to attend any of this year’s “Summer in the Square” Festival why don’t you get in touch to let us know what you thought of it and what you’d like to see next year!